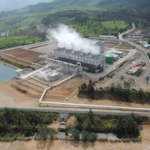 This service represents a commercial version of what has been implemented as a NEDO (New Energy and Industrial Technology Development Organization) demonstration project for this power plant in October 2019.*3 The demonstration project verified the effectiveness of the company’s EtaPRO® IoT-based predictive failure diagnosis technology.

The EtaPRO business was acquired by Toshiba America Energy Systems Corporation*4 last year to enhance its global servicing and maintenance solutions for turbines and equipment with EtaPRO’s digital asset performance management technology. This combination of steam turbine equipment and digital technology has borne significant results with GDE. Toshiba has delivered more than 60 geothermal turbines in 25 countries since 1966. Geothermal power generation is considered a key approach to achieving carbon neutrality.

EtaPRO also helps energy providers with a mix of generation types and as they transition from one energy source to another. The same software that monitors coal-fired plants also monitors solar, wind, and other renewable energy types, providing unparalleled, standardized, and customized capabilities across the world’s energy systems. EtaPRO is used in over 60 countries on assets producing 700 GW of power.

The system served to GDE is distinguished technologically by its use of EtaPRO’s AI to analyze real-time power plant operation data obtained from various sensors and detect signs of anomalies that may cause problems during normal operation. In doing so, it reduces the number and duration of power plant shutdowns. A demonstration project conducted by NEDO showed that it was able to reduce the rate at which problems occurred by over 20%. Another significant feature is the ability to detect signs of anomalies under conditions specific to geothermal power plants such as the unstable condition of the steam flowing into the turbine.

In Indonesia, the total installed power generating capacity was approximately 62 GW as of 2020, with coal-fired power generation accounting for about half of this total. Meanwhile, in accordance with the Paris Agreement, the Indonesian government has pledged to reduce greenhouse gas emissions by 29% by 2030. Electricity Business Plan (RUPTL) says geothermal power generation will account for about 3.4 GW (about 8%) of the 40.6 GW of power generation capacity to be added by 2030.*5 Toshiba Energy Systems & Solutions Corporation, (Toshiba ESS), has delivered equipment to several geothermal power plants in Indonesia. It will be proactive in proposing the IoT solutions that enable optimal operation that will help to solve issues faced by individual current and future customers.

By deploying this service worldwide, Toshiba supports the global move to more renewable forms of energy by enabling optimal efficiency at plants of every type and energy mix. With EtaPRO, plant operators can reduce the customer’s cost of power generation by helping improve power plants’ utilization rates, thereby promoting the spread of geothermal power generation and helping to achieve carbon neutrality.

*1: A group of geothermal power plants operated and managed by GDE, Indonesia’s state-owned geothermal power company. The project began operation in 2014, and has a rated output of 60,000 kW.