WAKEFIELD, Mass.–(BUSINESS WIRE)–An ABI Research study sponsored by the Near Field Communication (NFC) Forum revealed that 85% of consumer respondents, who were surveyed across nine countries, have used an NFC contactless card or mobile payment wallet, while contactless payment card usage has increased by 30% over the last two years. 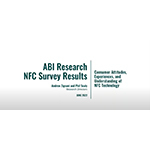 View a summary of the study results here.

This increase was fueled by NFC’s contactless capability and concerns around the COVID-19 pandemic, along with the continued growth in wearables, smartwatch, and mobile phone users. In addition, the data uncovered a trend, with 95% of respondents having used NFC contactless technology to pay for a product in the last year. This includes data showing nearly half of consumers having used NFC to pay for public transport and over a third have used NFC for consumer product interaction on products such as clothing, alcohol or luxury items. One of many interesting regional differences was that virtually every South Korean surveyed used NFC technology every day.

Additional findings from the report include:

Members can view the full survey results at the NFC Forum member portal.

The goal of the ABI research study was to follow up on the previous study completed in 2020 to gain a greater understanding of consumer adoption, familiarity, and experiences with NFC at both a global and regional level. NFC is a short-range technology that is a standard feature on the approximately three billion smartphones in use today – or 20% of the world’s population.

“Not only was usage up with nearly half of consumers using NFC nearly every day, but also that half prefer using their phone or watch over a contactless card. We expect digital wallet adoption to surge as NFC innovation continues to grow in the automotive and access control markets as a convenient, safe, and secure alternative to contactless cards,” said Mike McCamon, executive director, NFC Forum. “As increased NFC usage with devices, wearables, cards or other items not traditionally NFC-enabled continue to grow in volume, consumers will look for the NFC wayfinding mark on products to show them where to tap for the best connectivity.”

To learn more about how NFC is used beyond payment, register to attend our August 31 webinar Beyond Payment: Deploying NFC at Scale (nfc-forum.org).

About the NFC Forum

The NFC Forum was launched as a non-profit industry association in 2004 by leading mobile communications, semiconductor, and consumer electronics companies. The Forum’s mission is to advance the use of Near Field Communication technology by developing specifications, ensuring interoperability among devices and services, and educating the market about NFC technology. The Forum’s global member companies are currently developing specifications for a modular NFC device architecture, and protocols for interoperable data exchange and device-independent service delivery, device discovery and device capability.