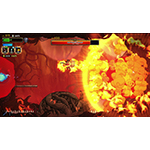 Nintendo Switch Online is a paid membership service that allows members to team up or face off online in compatible Nintendo Switch games, such as Splatoon 3, Mario Kart 8 Deluxe and Nintendo Switch Sports. Members also enjoy a curated library of NES and Super NES classic games, including Super Mario Bros. 3, Super Metroid and The Legend of Zelda: A Link to the Past, among many others. To find out more about the benefits that come with Nintendo Switch Online, to view membership options and to learn about a free seven-day trial for new users, visit https://www.nintendo.com/switch/online-service/.