NEW SHOWS ARE “ALL THAT” AND MUCH MORE

Nick’s Iconic All That Sketch-Comedy Series to Return with
New Cast of Kids Alongside Original Cast Members; Kenan Thompson Set to
Executive Produce

School’s Back in Session with Reimagined Are You Smarter Than A 5th
Grader from MGM Television, Hosted and Executive Produced by
John Cena

New Shows Also Include Two New Titles Produced by The Intellectual
Property Corporation, and the Acquisition of Paddington
(Working Title) and LEGO® CITY 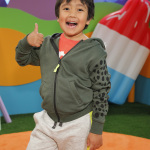 BURBANK, Calif.–(BUSINESS WIRE)–Nickelodeon
is unveiling a new content slate created for today’s kids who are
multicultural, family-focused, and in control of their entertainment
choices across platforms. With a foundation of supercharging its
globally powerful original franchises like SpongeBob SquarePants, Teenage
Mutant Ninja Turtles and PAW Patrol, and welcoming new,
acquired properties into its ecosystem, Nickelodeon’s new slate
represents a renewing of its commitment to serve all kids, through a
multicultural lens; bringing in talent kids love from other platforms
and formats; and opening up its demo to capture kid and parent
co-viewing, to satisfy this generation’s demand for shared family time.

The slate, announced today by Nickelodeon President Brian Robbins, was
put into development in October at the beginning of Robbins’ tenure and
will begin to debut on Nick’s platforms this summer.

“We have a laser focus on who kids are today, and what they want, so we
are making a wider variety of shows and series for them, and we’re
working with brand-new kinds of talent and producers,” said Robbins. “We
have a new creative team in place and a renewed energy that we’re
harnessing to bring the buzz back to Nick.”

Nick’s new direction was developed against the network’s defining
research insights into today’s kids, who: are the most diverse
generation ever, with the fastest growing segment being Hispanics; who
cite shared experiences with their parents and family as their top
priority; and who are in near-total control of their entertainment
choices, enabled by any one of the 12 connected devices found in today’s
average household.

Added Robbins: “Kids today are their own programmers, so we have been
working very fast to transfer our expertise as television content makers
to all the new places and platforms kids are going to,” said Robbins.
“Our vision for a new Nickelodeon is to fill up every screen, of every
size, to make an impact on as many consumers as we can and to be at the
forefront of conversation for today’s kids and families.”

Highlights of the new slate include: the return of Nick’s iconic All
That sketch-comedy series, showcasing a whole new set of kids
alongside members of the original cast, with Kenan Thompson serving as
an executive producer; a reimagined version of Are You Smarter
Than A 5th Grader, hosted
by John Cena; an all-new unboxing adventure series starring Ryan
of Ryan ToysReview, titled Ryan’s Mystery Playdate; America’s
Most Musical Family (working title), a nationwide search and
competition to crown the next big family musical act; The
Casagrandes, the animated spinoff from The Loud House,
featuring a multigenerational Mexican-American family; an untitled
scripted music-based series set in a boarding school for the
performing arts, produced by Simon Fuller and OneRepublic’s
Ryan Tedder, and featuring original songs and performances in every
episode; and ideas in development to spin off the characters from SpongeBob
SquarePants into their own stand-alone series, specials and
feature-length movies.

Robbins continued: “Everything we’re making will have different formats,
for all platforms, so we can travel the audience back and forth from one
to the other, while being home base for all the shows, the biggest
franchises, the characters and talent they love.”

Today’s kids represent the most diverse generation ever. Joining Nick’s
diverse programming slate is content to super-serve Hispanic viewers,
including:

Nickelodeon is working with talent kids love from other platforms, while
also creating content featuring their favorite formats and genres.

Nick’s insights reveal that family time is the most important passion
point for kids and parents today, with their top priority being to spend
time together and look for opportunities through shared experiences.
Today’s families state that watching TV together is their favorite
activity, corresponding to the current 10-year high in co-viewing, where
44% of kids’ viewing is with an adult. To capture co-viewing
opportunities, Nick is producing shows with built-in appeal to every
family member, including:

Nickelodeon is home to some of the biggest franchises kids love, and the
network is taking steps to increase these properties’ reach and grow
their footprint, as well as welcome in new franchises, to ensure Nick is
the top destination for everything kids want:

Nickelodeon, now in its 39th year, is the number-one
entertainment brand for kids. It has built a diverse, global business by
putting kids first in everything it does. The company includes
television programming and production in the United States and around
the world, plus consumer products, digital, recreation, books and
feature films. Nickelodeon’s U.S. television network is seen in more
than 90 million households and has been the number-one-rated kids’ basic
cable network for 22 consecutive years. For more information or artwork,
visit http://www.nickpress.com.
Nickelodeon and all related titles, characters and logos are trademarks
of Viacom Inc. (NASDAQ: VIA, VIAB).