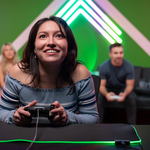 Each episode sees four players competing in a winner-takes-all challenge in various games. The players include popular social media influencers and Newegg hosts.

Viewers can also get involved by predicting the winner of each episode with successful guesses potentially earning prizes like an Xbox Series S or Thrustmaster gaming peripherals.

In the current schedule, viewers can expect a new episode at 4 p.m. Pacific Time every Wednesday on the Newegg Studios YouTube channel.

The show, which debuted in July 2021, was a limited-run series, airing new episodes every few months, until now.

For details about “The Gamer Lounge,” contestants and sweepstakes rules, visit this page: https://newegg.io/about_thegamerlounge.

Watch the latest episode and all episodes of “The Gamer Lounge” on YouTube: https://newegg.io/gamer_lounge

“The Gamer Lounge” is intended for viewers to explore the game along with the players. As the level progresses, the competition increases, which is where the fun takes off – as on-screen players try to sabotage each other so they can win that week’s challenge.

“’The Gamer Lounge’ is a wild, unpredictable series that tests the limits of contestants’ gaming skills and strategy,” Newegg Studio Producer Ethan Weiser said. “Viewer interest resulted in a move to weekly episodes and is further proof of the show’s growing success. Newegg Studios is committed to creating entertaining video content, and ‘The Gamer Lounge’ is central to that.”

NOTE: For photos of the contestants, access this folder: https://newegg.io/thegamerlounge_photos