REDWOOD CITY, Calif.–(BUSINESS WIRE)–After a record-shattering launch on the West Coast, the Impossible™ Burger will make its East Coast grocery-store debut tomorrow at all 100 Wegmans grocery stores in seven states and at two Manhattan locations of Fairway Market. 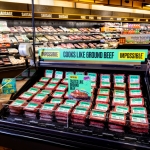 Though widely available in restaurants since 2016, the award-winning Impossible Burger first appeared in grocery stores just last week, when it debuted at all 27 outlets of Gelson’s Markets in Southern California.

“The Impossible Burger generated more excitement than any other single product we’ve seen in more than a half-century of operations,” said Gelson’s Markets CEO Rob McDougall. “In addition to exceptional sales and volume, the launch initiated a historic consumer reaction from both our loyal and new customers who were thrilled to play a part in the future of food. We look forward to the continued success of our relationship with Impossible Foods.”

Nutritious, delicious — and soon to be ubiquitous

The flagship product from Impossible Foods is the plant-based meat that rivals ground beef from cows for taste, nutrition and versatility. The Impossible Burger is on menus in more than 17,000 restaurants in all 50 states and in nearly every type of cuisine — from burgers and pizza to poke sushi burritos.

Tomorrow’s East Coast debut will quintuple the number of retail outlets that sell the Impossible Burger. As Impossible Foods increases production and capacity — both at its own plant in Oakland, Calif., and with leading food co-manufacturer OSI Group — it will accelerate its retail push.

Throughout the fourth quarter and in early 2020, Impossible Foods will expand its retail presence by launching the Impossible Burger in industry-leading grocery stores in key regions.

“Three years ago we introduced plant-based meat to the world in Manhattan at Momofuku Nishi, where Chef David Chang said the Impossible Burger blew him away,” said Impossible Foods’ CEO and Founder Dr. Patrick O. Brown. “Now all home chefs in the Northeast can experience their own ‘David Chang moment’ in their own kitchens — and accelerate the inevitable consumer movement toward plant-based food.”

John & Walter Wegman launched a family business 103 years ago when they started selling fresh produce from their pushcart in Rochester, NY. Now one of the largest private companies in the United States, Wegmans has nearly 50,000 employees and 100 stores in New York, Pennsylvania, New Jersey, Virginia, Maryland and Massachusetts, and North Carolina.

Wegmans is one of the most beloved regional grocery chains in America. In fact, Wegmans ranked #1 for corporate reputation among the 100 most visible companies, according to the 2019 Harris Poll Reputation QuotientⓇ (RQ) study and Market Force Information called it America’s Favorite Supermarket in 2018.

“Wegmans has offered the Impossible Burger in its Burger Bars and Pubs, in select stores, since the spring of 2019, and our customers absolutely love it,” said Ann Johnston, category merchant. “There’s a growing demand for plant-based options, so the fact that customers will now be able to prepare Impossible Burger at home is a big deal.”

Starting this weekend, shoppers can get free samples of the Impossible Burger at select Wegmans. For details, check out ImpossibleFoods.com. Browse the growing collection of Impossible recipes — from the classic American burger on the grill to lasagna, chili, meatloaf, dumplings and more. Home chefs can share their favorite recipes and photos by tagging #CookImpossible.

Considered the best grocery store in the tri-state area, Fairway Market offers the freshest produce and seafood, top quality meats and a wide variety of roasted coffees. The shelves are packed with gourmet items from around the world and locally made regional delicacies. It’s also home to the country’s most respected butchers, who produce their very own sausage in-house and process dry-aged beef on-site.

“Fairway Market started as the city’s premier produce market in 1933, with the freshest fruits, vegetables and other plants — so being the first East Coast retailer to sell the world’s hottest plant-based food harks back to our roots,” said Fairway Markets CEO Abel Porter. “We can’t wait for New Yorkers to experience the Impossible Burger — whether in our in-store gourmet kitchen or in their own homes.”

Starting tomorrow, a 12-ounce package of Impossible Burger will be available for $8.99 at two Fairway locations in Manhattan (74th Street and 86th Street). It will be available in the meat aisle and in the plant-based food section.

The Impossible Burger is delicious in all ground meat recipes, including stews, chili, sauces, braises, minces, meatballs, meat pies or any other beefy menu item. It’s easy to cook on an outdoor BBQ grill, flat top, Instant Pot, high speed oven, steamer or sauté pan. Home chefs can use the Impossible Burger in recipes from lasagna to lo mein.

Designed to disrupt, built to scale

Founded in 2011 by Brown, a Stanford biochemistry professor emeritus and former pediatrician, Impossible Foods makes meat from plants with a much smaller environmental footprint than meat from animals. The company uses modern science and technology to create wholesome food, restore natural ecosystems, and feed a growing population sustainably. Impossible Foods’ mission is to eliminate the need for animals in the food chain by 2035. Read Brown’s blog to learn more about the company’s mission.

Since the launch of 2.0, Impossible Foods’ sales have surged. Growth has come from every sales category in which the company does business — independent restaurants, large restaurant chains such as White Castle, Burger King, Red Robin, Cheesecake Factory and Qdoba, and non-commercial outlets such as theme parks, museums, stadiums, and college campuses.

The Impossible Burger is sold at restaurants in all 50 states and in nearly every type of cuisine — from pizza to poke sushi burritos. The Impossible Burger is now America’s most popular late-night delivery snack, according to Grubhub’s “State of the Plate” report, with delivery sales surging 529% in the first half of 2019 — proof that the product satisfies the midnight cravings of carnivores on the prowl for chow.

The Impossible Slider at White Castle is considered one of America’s best fast-food burgers, and Impossible Burger mentions on Yelp are on fire. Political commentator and Texas cattle rancher Glenn Beck couldn’t tell the difference between the Impossible Burger and ground beef from cows in a side-by-side taste test, and the Washington Post called Impossible’s plant-based burger a “wake-up call to the meat industry.”

Since launching in Singapore in March 2019, sales have increased more than five-fold in Asia. Impossible Foods’ plant-based meat is sold in a wide range of restaurants and cuisines throughout Hong Kong, Singapore, and Macau — including internationally celebrated establishments by David Myers, Gordon Ramsay and Wolfgang Puck.

Impossible Foods does not yet sell the Impossible Burger in Asian grocery stores. Stay tuned for more news — including the next retail launches — by visiting impossiblefoods.com/media and on social media.

Wegmans Food Markets, Inc. is a 100-store supermarket chain with stores in New York, Pennsylvania, New Jersey, Virginia, Maryland, Massachusetts, and North Carolina. The family company, recognized as an industry leader and innovator, celebrated its 100th anniversary in 2016. Wegmans has been named one of the ‘100 Best Companies to Work For’ by FORTUNE magazine for 22 consecutive years, ranking #3 in 2019. The company was also ranked #1 for corporate reputation among the 100 most visible companies, according to the 2019 Harris Poll Reputation Quotient® study.

Fairway Market is a unique food retailer offering customers a differentiated one-stop shopping experience as “The Place To Go Fooding.” Fairway has established itself as a leading food retail destination in the Greater New York City metropolitan area, recently expanding with the opening of The Cooking Place, a cooking school that brings the same passion and philosophy about fooding to its customers. Fairway Market offers an extensive selection of fresh, natural and organic products, prepared foods and hard-to-find specialty and gourmet offerings, along with a full assortment of conventional groceries.