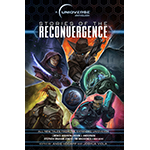 The Unioverse is an epic original science fiction story, videogame series and platform for user-generated creativity launched this year by a team of gaming and entertainment industry veterans behind titles such as Grand Theft Auto, Donkey Kong Country and Crackdown. Set in the near future, the Unioverse story centers around a technology discovered on Mars that allows anyone to instantly transport their consciousness across galaxies. The narrative direction of the Unioverse is led by Brent Friedman, a master storyteller whose previous credits include writing on Star Wars: The Clone Wars, The Walking Dead, Call of Duty, and Star Trek: Enterprise.

Stories of the Reconvergence, edited by Angie Hodapp and Joshua Viola, will showcase short stories and poetry set in and inspired by the Unioverse from some of today’s most popular genre-fiction writers, including:

A full list of all 27 authors writing Stories of the Reconvergence can be found below.

Each story will also feature its own original Unioverse artwork created by concept artist Stuart Jennett (Battlestar Galactica, Star Citizen, Warhammer), and the book will have cover art by Aaron Lovett (Cyber World, Inkbound, Monster Train). Stories of the Reconvergence will be published in Summer of 2023.

“A franchise as ambitious as the Unioverse is ripe for multi-platform storytelling,” said Joshua Viola, Founder of Hex Publishers and Editor, Writer and Creative Director on the Unioverse anthology and comics. “The anthology will deepen the lore of the Unioverse and open it up to diverse storytelling, while the comic books provide rich art and a perfect starting point for fans just beginning their Unioverse journey.”

In addition to the anthology, Hex is leading the creation of a series of six comic books that introduce the initial five Unioverse heroes that people will be able to play in Unioverse videogames. The series is written by Hex Publishers Founder and Colorado Book Award winner Joshua Viola and Angie Hodapp, Director of Literary Development at Nelson Literary Agency, with interior art by Ben Matsuya (Cryowulf, Jupiter Jet), cover art by AJ Nazzaro (Hearthstone, Overwatch) and a variant cover by Tyler Kirkham (DC, Marvel). The first comic, titled Unioverse: Reyu, will be available digitally in Spring of 2023.

“This anthology and comic series are just the beginning for Unioverse storytelling,” said Tony Harman, Co-Founder and CEO of Random Games. “Not only will we develop more stories with established authors and artists, the Unioverse platform will help us discover and promote the next generation of talent.”

To find out more about the Unioverse and stay up-to-date on the anthology and comic books, visit UNIOVERSE.com, follow @TheUnioverse on Twitter and join the Unioverse Discord server.

Founded by gaming industry veterans Tony Harman and Wyeth Ridgway, Random Games (https://random.games/) is a development studio spearheading an entirely new concept in videogames and franchise entertainment through a combination of community empowerment and blockchain technology. The company’s first franchise, The Unioverse, is a sci-fi epic that will span across video games, comic books, novels and more. At the same time, the Unioverse community will be encouraged and equipped to create their own stories, games and more with official high-quality artwork and other assets available as royalty-free downloads. To join the robust Unioverse community, visit the Unioverse Discord server.VERSE.com, follow @TheUnioverse on Twitter and join the Unioverse Discord channel.

Hex Publishers (https://hexpublishers.com/) is an independent publishing house owned and operated by Joshua Viola, proudly specializing in genre fiction: horror, science fiction, crime, dark fantasy, comics, and any other form that awakens the imagination. Hex features numerous national and international bestselling authors, as well as Hugo, Nebula, and Bram Stoker Award winners. The press values both the author and the reader, with an emphasis on quality, diversity, and underrepresented voices.