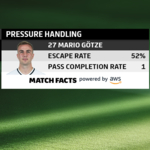 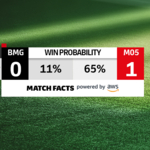 Win Probability: The new Win Probability Match Fact emphasizes notable swings in the chances of a team winning their respective match throughout the 90 minutes of game play. This new fact is based on action from the game, including the difference in goals, the time remaining, and other relevant team statistics. It uses several existing Bundesliga Match Facts, such as Expected Goals, Skill, and Set Piece Threat from the live match, as well as statistics from previous games to alert fans to a significant change in a potential match outcome. Win Probability quantifies this shift in an easy-to-understand graphic for viewers.

Pressure Handling: The new Pressure Handling Match Fact highlights players who are performing exceptionally well when under pressure by the opposing team. The central metric is the escape rate, which highlights how often a player breaks out from these high-pressure situations while keeping possession of the ball for his own team. The high-pressure situations will be evaluated by performance metrics like passes completed under pressure.

These new stats bring the total of Bundesliga Match Facts powered by AWS to 12, delivering a comprehensive set of real-time advanced analysis to millions of Bundesliga fans around the world. Bundesliga Match Facts provide enhanced engagement by helping audiences better understand the performance and game strategy of teams and offering deeper insights into the performances of their favorite players. The DFL Deutsche Fußball Liga generates Bundesliga Match Facts by gathering and analyzing a total of 3.6 million data points from each game in real time. To maximize the data, the league uses a combination of AWS analytics and machine learning tools, as well as computing, storage, database, and serverless services, to gain statistics that deliver enhanced insights into game strategy and outcomes. Bundesliga Match Facts are delivered as on-screen graphics during broadcasts and in the official Bundesliga app to help fans, coaches, players, and commentators better understand and analyze action on the pitch and game outcomes.

“Hard-fought competition, pivotal plays, nonstop energy—it all happens on Bundesliga pitches, and we offer viewers deeper insights into what’s happening on the pitch with Bundesliga Match Facts powered by AWS,” said Peer Naubert, chief marketing officer for Bundesliga International. “A total of 95% of international Bundesliga fans participating in an online survey told us that these advanced statistics add value to their Bundesliga experience, and so we continue to create new Match Facts, driving the viewing experience for the millions of worldwide fans to new heights. Real-time insights help deepen fans’ knowledge of what’s happening and builds their love for the sport and its players. The two new Match Facts this season will provide even greater detail and analysis, and, together with AWS, I’m thrilled to see how our Match Facts evolve.”

“Bundesliga fans are incredibly passionate and love digging deep into the details about their favorite teams and players on the field. We’ve helped the Bundesliga build a dozen Match Facts, bringing an immersive experience to the league’s passionate viewers,” said Florian Hartwig, head of enterprise for AWS Germany, Amazon Web Services EMEA SARL. “From fans and coaches to commentators and reporters, everyone is getting more out of the game thanks to the growing portfolio of Bundesliga Match Facts that provide better insights to understand players’ capabilities. The latest stat will give fans insights into high-pressure situations alongside the swing of both team’s likelihood of winning the match. We’re proud to help Bundesliga deliver a richer, more engaging experience for its viewers.”

The Bundesliga is the top professional association football league in Germany. The league was established in 1963 and comprises 18 teams, which operate on a system of promotion and relegation with the Bundesliga 2. The Bundesliga is broadcast on television in over 200 countries and is operated by the DFL Deutsche Fußball Liga.