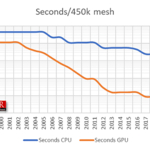 During interviews with CAE companies, many said GPUs outperform CPUs by many multiples depending on the specific task. However, despite this apparent advantage, some engineers worried that GPU-accelerated applications might pay for the speed boost with reduced accuracy. Instead, we found that developers and their customers are finding results from GPU-accelerated calculations to be as accurate as those from CPU-based systems. In CAE, the net result is that the GPU has leaped ahead of the CPU, reducing the time needed to process simulation meshes.

GPU acceleration enables workstations to do the jobs previously performed by high-performance computing (HPC) machines. As a result, performing those jobs can be less expensive in terms of energy use and financial costs. The ability to perform more iterations cheaper and more sustainably enables designers to take advantage of simulation earlier in the design process and have confidence in the results.

Some independent software vendors (ISVs) are sticking with CPUs, and some newer companies and programs are moving to the GPU. In JPR’s opinion, the most sensible approach is a hybrid approach that lets users apply GPUs and CPUs where they will be most effective according to the problems they are solving and the hardware they have.

There are clear takeaways from this project. First, the use of GPU acceleration in established CAE products is increasing and so is the development of new products written from the ground up to take advantage of GPUs. Second, sustainability also has become an essential consideration for developers and customers. And finally, CAE has the potential to become a more integrated part of the design process, which leads to better designs and more sustainable products.

JPR’s eBook, Accelerating and Advancing CAE, is free and available for download.

Dr. Jon Peddie has been active in the graphics and multimedia fields for more than 30 years. Jon Peddie Research is a technically oriented multimedia and graphics research and consulting firm. Based in Tiburon, California, JPR provides consulting, research, and other specialized services to technology companies in various fields, including graphics development, multimedia for professional applications and consumer electronics, high-end computing, and Internet-access product development. JPR’s Market Watch is a quarterly report focused on PC graphics processor market activity for notebook and desktop computing.